FAQ for the proposed Vanatru Symbol

So I’ve been getting a lot of questions about the Vanatru Symbol I proposed in February. Here I am trying to address as many of the questions and concerns that were raised as I can. If you have more questions, please do ask, and I will do my best to explain! 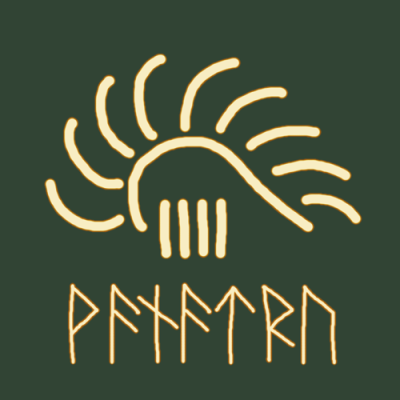 This version has 9 bristles and 4 legs, deliberately. Historical versions vary.

Q: Did you design this?

A: No, I found it on well-documented historical objects. Its original use was representing a boar in a Heathen context, where boars frequently represent the Vanir, fertility, and fierceness. I am promoting it for use representing the Vanir as a group, and Vanatruar, in modern practice.

I mean, I made the graphic above, so if you want to use that particular graphic, or the one below, please credit me. I decided to go with specifically 9 bristles and all 4 legs and stuff, but those are not what I consider significant details for claiming design credit.

The symbol itself is public domain.

Q: Did you discover the objects?

A: Not in the academic sense of being the first to locate it since it was lost to history, no. But I am who went “Really? Abstract boars from a Heathen culture next to a Celtic culture? Perfect! Let’s use it for the Vanir!”

The symbol is available to the public. The inspiration may be mine, but the Vanir belong to us all, and the design is not copyrighted.

Q: Can I use this for something else?

A: Well, I can’t stop you. But I would really rather you didn’t.

There are plenty of other symbols that can be used to represent just about anything this symbol could stand for. All I ask is that THIS particular symbol be used only to represent the Vanir as a group, and Vanatruar.

If you would like help finding another suitable symbol for your purposes, I’d be happy to do what I can. Just drop me a line.

Q: Is this what historical Vanatruar used?

A: Vanatru is not a historical tradition, it’s a modern reconstructionist tradition. There was at least one ancient Vanir cult (I want to say it was in Sweden, but I don’t have my sources handy), but we know very, very little about them. Most of the lore we have about the Vanir that distinguishes Them as such comes from the Icelandic Aesir-centric perspective. All the historical symbols we currently know to represent the Vanir represent either individual Vanir, or do not clearly represent only the Vanir.

Q: Do I have to use this if I’m Vanatru?

A: There is no source of authority in Vanatru who could possibly enforce such a demand upon you. Feel free to adopt or not adopt this symbol for the Vanir according to your own conscience working with Them.

Q: Should I stop using the symbol I’m already using to represent one of the Vanir?

A: No! It’s quite possible to have multiple useful symbols for a concept, and we will still need the separate symbols for individual Vanir! It’s just that we didn’t already have a recognised symbol to represent the Vanir as a group.

Also, not all Heathens who honor one or more of the Vanir are invested in honoring the Vanir as a group separate from the Aesir, nor do they identify as Vanatru. I therefore don’t expect even everyone dedicated to one or more of the Vanir to use this symbol at all, much less instead of other symbols they like, because I’m promoting it to represent something that does not work for their practices.

Q: Wait, this is a Roman thing?

A: Not really. The coin-making technology was developed by the Pagan Romans, and later taught to the Anglo-Saxons who were Christian by the time they taught it to the Heathen Danes. (It’s all about conquering the neighbors for fun and profit, really. Yay Human History.)

The grapheme design itself was created entirely by the Heathen Danes for use on the coins they made after they learned how. There are plenty of other designs on Heathen Danish coins of the time, for that matter.

This particular design also shows the aesthetic influence of their Celtic neighbors.

Q: So the design is Heathen Danish… and Celtic?

A: It’s Heathen Danish with Celtic influences. In other words, the people who designed it were Heathen Danes, who saw Celtic art made by their neighbors, and thought it was cool looking.

I found the combination to be particularly appropriate because most Vanatruar I know also feel pulled to the Celtic side, and we have found a lot more overlap in style and domain between the Vanir in particular and various Celtic traditions and gods.

Q: It’s kind of abstract. Could it look more like a boar?

A: Sure. If you keep the core lines of the swooping back, 9 bristles, and 4 legs clear, you could add a bit of detail without making the symbol unrecognizable.

I chose a very simple design because I wanted it to be something both easy to read, and easy for even non-artists to draw, as well as something that can be rendered very small or large and still make sense. It’s deliberately a grapheme, not a complex picture.

The strongest group symbols are recognizable even in very crude forms. Christianity has the Cross and the Fish, both of which are, at their core, very simple symbols. Wicca has the Pentagram, simply a 5 pointed star in a circle. Judaism has the Star of David and the Chai. You get the idea.

They work because they’re SO simple they register directly as their meaning without you having to stop to parse them as an image. Granted, it will take a while for the meaning here to catch hold, but we’ve got to start somewhere, eh?

Q: Could it be more pretty?

A: Sure. The same way there are also plenty of highly decorative versions of a Pentagram or a Cross or a Star of David, there can be more elegant versions of this Vanatru Boar. Just keep the basic lines the same, and it should be recognizable for the same symbol.

A more elegant rendering of the Vanatru Boar symbol

Q: Does it have to face left?

A: Nope, that just seems to be what’s easier for my hands. Feel free to flip the image.

I will admit that I favor facing left for several personal reasons, but none of them are specific to the Vanir. 1: I happen to be an American Liberal. 2: I live in California – the “Left Coast” 3: All of my immediate blood family (except me) is left handed. 4: My sense of time reads right-to-left, so this boar is facing the future.

But that’s just me. I fully expect your mileage to vary.

Q: Is the word “Vanatru” in runes part of the symbol?

A: No, I just wanted the first version out there to include the overt reference for clarity’s sake.

Got any more questions? Ask below!

Ember Cooke has been a member of Hrafnar and Seidhjallr for more than a decade, where she trained to be a Seidhkona, Galdrakona, and Gythia. She founded the Vanic Conspiracy and made ordination vows to the Vanir and her congregation in the summer of 2013. She has contributed to several publications on Heathen and Northern Pagan subjects and regularly presents rituals and workshops at festivals. Her personal practice is more diverse, as the Vanir have lead her into cross-training and service for the wider Pagan community. This has including medium and servitor training in American Umbanda, clergy training with the Fellowship of the Spiral Path, and jail ministry for local counties. She holds a BA with honors in Religious Studies from Santa Clara University. Ember has lived all her life in the south San Francisco Bay Area, and is intimately bound to the valley of her birth.
View all posts by EmberVoices →
This entry was posted in Crafts, Polytheistic Theology, Praxis, Vanatru and tagged boar, Boars, Heathenism, sceatta, symbol, Vanatru. Bookmark the permalink.

10 Responses to FAQ for the proposed Vanatru Symbol