Perlandria said, “One of the grace names I heard for our home when growing up was Valley of Flowers.”

I should put off this post until mid February, perhaps, as that’s when the flowers will return in force. I’m curious whether that name refers to flowers on the ground, or flowers on the trees.

This valley was known for orchards for a long time, and fruit-bearing plants are flowering plants. In the early spring my home is absolutely covered in flowering trees. I find them impossible to miss and spend my days pausing at seemingly random intervals whenever some flowering tree seizes my attention again. My folders are filled with camera phone images of cherry and plum and crabapple trees in full bloom. 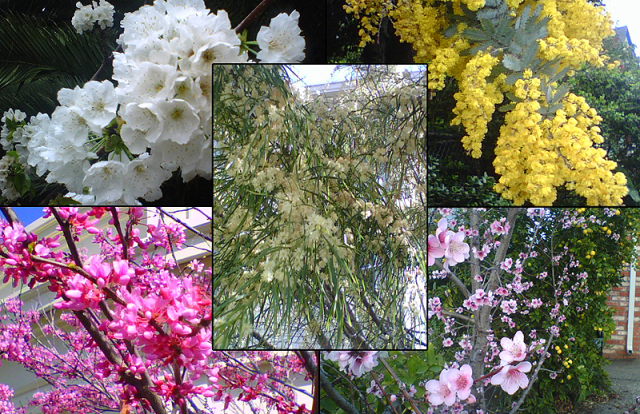 But the ground flowers are prominent too. The Golden Gate is admittedly outside my valley. Many people assume the name refers to the Gold Rush or such, but it actually refers to all of the golden flowers that covered the hills to either side of the opening of the bay. Native California flowers are disproportionately yellow, it seems.

Perhaps flowers in general are disproportionately golden? I know the imported flowers that grow most easily around here are also yellow. The remaining orchards are inevitably covered in mustard flowers to attract the honeybees. The fallow areas around the bay are often covered in wild carrots: yellow-flowering fennel and its white-flowered cousin queen anne’s lace. My neighbors are often frustrated at the perennial invasion of dandelions in our lawns, but I rather like them.

The flowers I grew up with are mostly not native, though. My Mom has taken up (and all but given up) California native plant gardening since then, but as a kid the yard was filled with roses, irises, and European invasive weeds.

The sole native exception: California Poppies. California Poppies aren’t the same genus as Common, Icelandic, or Opium Poppies, but they apparently do have some similar, milder medical uses against insomnia, depression, and other ailments, being from the same larger family.

From there I take a left turn into fantasy: There are California Poppies all over the Hinterlands in Dragon Age: Inquisition. I was very amused and pleased to find them there. At a glance many of the conifers in the game look like redwoods, but I realize no the needles are wrong, they’re fir trees with similar bark. Ahh well.

Ember Cooke has been a member of Hrafnar and Seidhjallr for more than a decade, where she trained to be a Seidhkona, Galdrakona, and Gythia. She founded the Vanic Conspiracy and made ordination vows to the Vanir and her congregation in the summer of 2013. She has contributed to several publications on Heathen and Northern Pagan subjects and regularly presents rituals and workshops at festivals. Her personal practice is more diverse, as the Vanir have lead her into cross-training and service for the wider Pagan community. This has including medium and servitor training in American Umbanda, clergy training with the Fellowship of the Spiral Path, and jail ministry for local counties. She holds a BA with honors in Religious Studies from Santa Clara University. Ember has lived all her life in the south San Francisco Bay Area, and is intimately bound to the valley of her birth.
View all posts by EmberVoices →
This entry was posted in Gnosis, Land Spirit Work, Personal, Polytheistic Theology, Praxis, RedWood Vanatru, ST4R and tagged animism, Devotional Polytheism, Divination, Emotion, Home, Land Spirits, Landvaettir, Landwights, Month of Written Devotion, Music, Pagan, polytheism, Religion and Spirituality, Santa Clara, Vanic Values. Bookmark the permalink.